A place for those new to Biblical Hebrew to ask basic questions about the language of the Hebrew Bible.
Forum rules
Members will observe the rules for respectful discourse at all times!
Please sign all posts with your first and last (family) name.
Post Reply
4 posts • Page 1 of 1

But I really don't want this thread to drift onto the subject of arguments over whether it's כארי or כארו What I am asking here, the subject here, is let's suppose that it's כארו I'm asking about Kline's idea that the root is כאר (also i'm not looking to get into debate over whether supposing it is כארו whether it's actually a spelling of כרו). I'm saying let's suppose not only that it's כארו but let's also suppose that the root is כאר which is an idea that seems to be put forth by Kline.

So, there's a suggestion, for the case of it being כארו that it may be an ancient one-off spelling variant of כרו i.e. with an aleph כארו. Let's put that possibility aside.

So getting to what i'm asking,

there's another possibility, that seems perhaps to be brought up by Kline, that it's a root כאר but I can't find much about this root. Bibleworks has the groves wheeler morphological index and lists nothing for it. (of course, bibleworks has the WLC for the Hebrew which has כארי ) but there's no biblical reference anywhere for כאר at least not in the WLC/Leningrad Codex.

Kline seems to make some DSS references but i'm not that familiar with the DSS.. and I can't see what verses if any , he is referring to, when it comes to this alleged root. 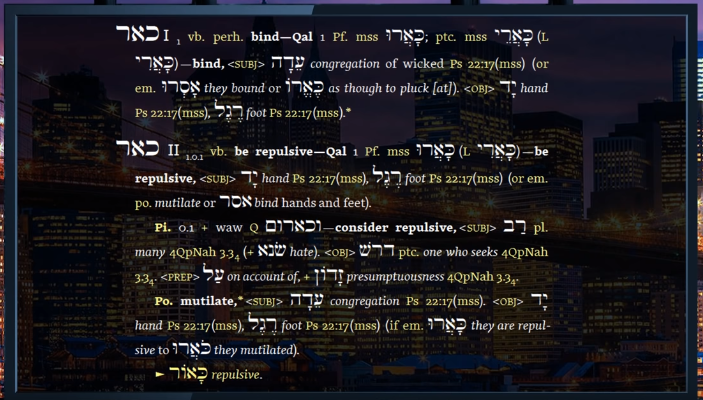 Kline also mentions כארום I did a search in bibleworks and find nothing.

Kline also mentions כאור that he translates as repulsive. I cannot find this. I searched in bibleworks for the word כאור and every case referred to אור (light). So I cannot even find a biblical reference for the word כאור So where is he getting this word from?
Ralph Zak
Top

So once there was a talk about it but you'd like to focus on the dictionary you present here.

So when I look at what it says, I would say that in the Entry of linking כאר to bind, he may links it to Samaritan Aramaic, when the verb has the sense of binding sheaves.
(I don't know the time of that usage - if it is early or late)
But in the Jewish Aramaic, I didn't see that meaning.

It could be also, that he links it to the basic meaning of the basic-root כר which has the meaning of "round", and with that, he forcibly dresses this basic meaning כארו ידי ורגלי as "tie my hand and feet" (as rounding them, or something like that).

On the second entry, he writes "repulsive", and that seems to me as he links it to the usage of the post-biblical usage of כאר as כער.
But we should notice that this usage in the post-biblical meaning doesn't come as a Qal verb.
When it comes to Qal, it comes as a participle, and not as a verb.
(as a verb, it comes in Hitpael/Nitpael).


וכארום, in the same sense of the post-biblical era, is found in the Qumranic Pesher Nahum.
David Hunter
Top

The 2nd century AD Jewish translation by Aquila translated the word as "they have disfigured", indicating he saw a 3mp verb with a waw ending.
His 2nd revision translated it as "they have bound".

Another Jewish translation at the end of the 2nd Century AD by Symmachus translated it as "like those who seek to bind".
Sincerely yours,
Steve Miller
Detroit
http://www.voiceInWilderness.info
Honesty is the best policy. - George Washington (1732-99)
Top
Post Reply
4 posts • Page 1 of 1

Users browsing this forum: No registered users and 2 guests